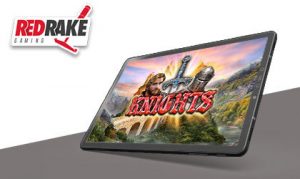 Red Rake Gaming, a top-rated casino games specialist, has just announced their latest online slot game, KNIGHTS. Consisting of a 5×3 reel grid, the game includes an extra magic reel and plenty of features. KNIGHTS is based in the Kingdom of Camelot, where battles involving brave knights are a regular occurrence as they try to find the Holy Grail. Players will be able to dive into this magical world by simply spinning the reels of this new game!

There are several features and special symbols within this new game. The wild is Merlin, the famous wizard known to the world of Camelot. The job of the wild is to double the prize if the symbol is found within a winning line.

According to Red Rake Gaming…

A main feature of the new game is the extra sixth magic reel. The reel can be activated or deactivated during the normal feature. Once activated, players can earn bigger wins with up to 18,009x the wager up for grabs. The sixth reel helps to complete winning combinations while players spin the reels.

Based on the official press launch … The Spanish games innovator’s newest title is a 5times;4 reel and 50 pay-line video slot that’s packed with additional spins. In the game, players are transported through the years to [...]

It’s back-to-back news for Spanish game maker, Red Rake Gaming, as the Valencia-headquartered firm announces that it has secured a license with the prestigious, Malta Gaming Authority (MGA). According to the official press [...]
Comments
Leave a reply