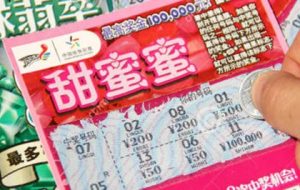 A departure from the previous two months, Mainland China, experienced an 8.8 percent drop in aggregated lottery sales, which came in at CNY23.41 billion (US$3.49 billion) for February 2019, when compared with the same period the previous year.

The governmental figures also showed that in year-on-year terms and where lottery ticket sales are permitted, in 24 of mainland China‘s 31 regional-level jurisdictions sale were also down. According to GGRAsia, the national executive agency of the Central People’s Government offered no explanation for the decline in February lottery sales.

Not all lottery sales in February were down, however, as the news agency reports that according to data from the ministry, aggregated sales of lottery products in Sichuan province stood at CNY1.17 billion for the month, which was a 29.6 percent swell from the year prior. It was the biggest increase of all 7 jurisdictions which reported increased sales for February.

And while total lottery ticket sales were down 16.5 percent from the year prior, Guangdong, a coastal province of southeast China, maintained its status as the nation’s most lucrative market for February lottery products courtesy of aggregated lottery ticket sales that reached CNY2.10 billion for the period.

Following Guangdong was the Jiangsu province with total lottery ticket sales in February of CNY1.92 billion, which in year-on-year terms was a rise of 27.7 percent.

In the January to February period, China Welfare Lottery sales increased by a slight 0.2 percent to CNY32.51 billion when compared with the previous twelve-month period, while China Sports Lottery sales were up 23.2 percent at CNY38.85 billion.

In the first two months of 2019, the increase in sales from China’s official lottery products was reportedly held up by a 25.1 percent year-on-year swell to approximately CNY47.96 billion (US$7.16 billion) in January. The hike was believed to be partly due to a “huge increase” in China Sports Lottery sales during the month, according to official data released by the ministry.

Approximately 56 percent of the Asian nation’s January sales of lottery products were from sports lottery, which at nearly CNY26.74 billion, represented a year-on-year swell of 40.8 percent. The rise was described in the official statement at the time as being influenced by the AFC Asian Cup, a quadrennial international association football tournament which was held from January 5 – February 1 this year.

At South Korea, the firm behind the under-construction Jeju Dream Tower integrated casino hotel has reportedly announced that it is now hoping to have completed all work on the coming $606.6 million development by the end of 2019. Extended deadline: [...]

Chinese property developer, New Silkroad Culturaltainment Limited, has declared the governor for its South Korean island state of Jeju has given you one of its subsidiaries formal consent to begin creating a new casino hotel. Partnership strategy: [...]
Comments
Leave a reply