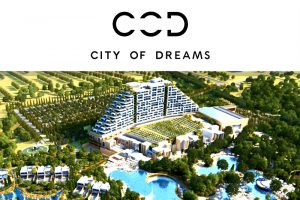 Integrated Casino Resort Cyprus Ltd. (ICR Cyprus) awarded Tuesday the concession for the construction of what would be the Republic of Cyprus’ first integrated casino resort to Avax – Terna J.V., a joint venture between Greek companies GEK Terna and J&P Avax.

ICR Cyprus revealed in a Tuesday statement that according to the principal contract, construction is set to begin early this month and is scheduled to be completed in 2021.

City of Dreams Mediterranean will be the first integrated casino resort on the territory of the Republic of Cyprus and Europe’s largest property of this kind. The luxury resort will be built over 37 hectares of land in the western part of the city of Limassol. ICR Cyprus said Tuesday that the property will be constructed to the “highest sustainability standards to adapt to the natural environment.”

The complex will feature a 16-story hotel tower with 500 guest rooms, including multi-bay suites with garden balconies, an expo center, MICE facilities, an “extensive poolscape area” with four outdoor pools, Jacuzzis, and other amenities, an expansive children’s playground, and multiple dining facilities.

The casino portion of the resort will feature more than 100 gaming tables and 1,000 slot machines. The gambling venue will operate under the Cyprus Casinos brand, the local casino operation of Hong Kong-listed gaming and hospitality giant Melco Resorts & Entertainment. Melco and its Cypriot business launched last June a temporary casino near the site where the main resort would be built as well as two of four satellite casinos – one in the Cypriot capital, Nicosia, and one at Larnaca International Airport.

ICR Cyprus said Tuesday that the scope of work in the principal construction contract includes the construction of all resort facilities on the designated 37 hectares of land, including the central podium building which will house the casino floor, world-class dining facilities, convention and conference facilities, luxury retail space, and a spa and wellness center with an indoor pool. The podium will also include the main hotel entrance, staff areas, plant rooms, and operations facilities.

City of Dreams Mediterranean is expected to create 4,000 jobs during construction phase and 2,400 permanent jobs once fully operational. According to early projections the luxury resort will generate €700 million per year for the Cypriot economy after year two of operation, which represents around 4% of the annual GDP of the tiny Mediterranean nation.

Commenting on the award of the construction contract, Melco CEO and Chairman Lawrence Ho said Tuesday that the move “marks the beginning of the construction of City of Dreams Mediterranean and demonstrates [their] ongoing commitment to the project as well as to Cyprus.”

Avax Chairman Christos Joannou said that they are honored to be taking up an important project that “will drastically change the entertainment and tourism industry for both Cyprus and Europe.”

According to recently released data by the Cyprus Gaming and Casino Supervision Commission, the nation’s temporary casino in Limassol and two satellite casinos in Nicosia and Larnaca drew 470,000 customers during their first months of operation. Gamblers wagered more than €210 million and were paid out €175 million, the local regulatory body said. Two more satellite casinos – one in Paphos and one in the Famagusta area, are expected to open doors later this year.