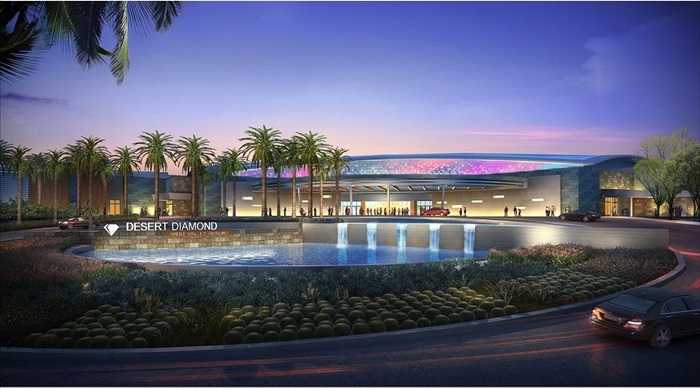 In Arizona, a June 26 meeting of the Glendale City Council saw the unanimous approval of the purchase of a nearly 11-acre parcel of land located near the Tohono O’odham Nation’s casino property. The nod for the $3.1 million purchase of the city-owned property comes nearly a decade after the federally recognized tribe announced the plan for its $400 million Desert Diamond West Valley Resort and Casino slated to open in December 2019.

The Glendale Star reports that the parcel, which on three sides surrounds land already owned by the Tribe, now gives it complete ownership of the acreage located near the new casino which has been under construction since the December 2017 groundbreaking by the Tohono O’odham Gaming Enterprise (TOGE). According to the news agency, the property, which in 2002 was purchased by the city from Bill and Gertrude Hickman, would be used for yet to be disclosed future economic development, and not for gaming.

Edward Manuel, Chairman for the Tohono O’odham Nation, thanked the city for its support “on the endeavor in purchasing this land.” He further communicated, “We purchased over 54 acres to build a casino and also purchased 88 acres for future economic development and this purchase makes our land complete for future development.”

Meanwhile, City Engineer, David Beard, said that the sale would not have a “financial impact on city departments with property maintenance actually being eliminated for the city.”

The major casino project was first announced by the Tohono O’odham Nation on Jan. 29, 2009. Having faced years of court challenges and multiple attempts to circumvent federal legislation to freeze the project, the Arizona tribe opened the interim venue on December 20, 2015, having been only approved to serve non-alcoholic beverages and offer Class II gaming. However, in July last year, the U.S. Department of Interior gave final approval to changes in the Tribe’s gaming compact with the state which cleared the way for Class III gambling. Less than a month later, the liquor license was approved by the Arizona Department of Liquor Licenses and Control for the Desert Diamond West Valley Resort and Casino.

The interim casino employs nearly 600 people and will maintain operations during construction. It will upon completion and opening reportedly transition to warehouse use.

“We are on time, under budget and will be ready for the December 2019 grand opening,” said Rudy Prieto, Tohono O’odham Chief Executive Officer of Gaming Enterprise. “We have about 500 construction workers working hard and by this time next year, we should have about 3,900 employees working.”

Prieto also made mention of positive discussions between the Tribe and city officials.

“This purchase would produce a cohesive property and assist in planning future development of the property that complements the existing amenities at Westgate and elsewhere in the Sports and Entertainment District,” said Prieto.

Manuel thanked the city for accepting its offer and said he hopes their working relationship continues. “We intend to build bridges, not burn them, and we want to create alliances with communities, and we are making every effort to do that here in Glendale,” said Manuel.

Sun Devil Stadium existence: The federally-recognized tribe used an official Friday press release to detail the Arizona Hotshots is one of eight teams competing in the AAF’s inaugural season with each of the side’s home games being staged [...]

This week allegedly watched a senior member of the North Carolina Condition Senate introduce legislation that could see legalized sportsbetting on a wide array of professional and collegiate events debut at the southern country as soon as the summer. [...]

Sportsbetting legislation gets the nod in Arizona

Efforts to deliver sportsbetting into the western state of Arizona allegedly received a massive boost earlier this week courtesy of a legislative committee voting to move a proposed legalization step on to another stage of the approval procedure. Winning [...]
Comments
Leave a reply