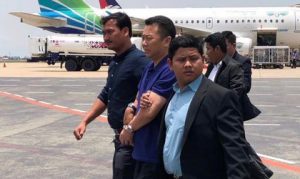 Shares in casino operator, Landing International Development Limited, have reportedly plunged amid news that the firm’s Chairman, Yang Zhihui (pictured), may have been arrested as part of an investigation into allegations of corruption.

According to a report from GGRAsia, the deterioration began yesterday morning after the Hong Kong-listed company revealed that it was unable to contact Yang as rumors circulated that the mainland Chinese billionaire had last been seen in Cambodia. This decrease saw the value of the firm’s shares drop by some 35% after only 90 minutes of trading.

It was also reported that Landing International Development Limited shares were subsequently suspended before trading resumed again earlier today. By the close of play, their value has purportedly fallen by a further 16% to stand at only about $0.40.

The casino operator, which is responsible for the giant Jeju Shinhwa World integrated casino resort in South Korea, currently has a market capitalization of approximately $1.18 billion, although its shares are now worth 42% less than a week ago. Compounding investor worries, this value has plummeted by 83% from the high of $2.25 seen in January.

According to GGRAsia, the company’s prospects were certainly not helped after a photograph appeared yesterday afternoon showing a man resembling Yang being led away in handcuffs from an airplane carrying the livery of state-owned Chinese low-cost airline Lanmei Airlines Company Limited. This aircraft operator is registered in Cambodia and the detained subject is pictured on the tarmac in the company of two security personnel.

Beijing-based news organization, Caixin Media Company Limited, asserted this morning that Yang has become ‘the latest target’ of Chinese law enforcement officials investigating possible ties between private businesses and the state-owned China Huarong Asset Management Company Limited. GGRAsia detailed that the former Chairman for this firm, Lai Xiaomin, is the subject of an official investigation into claims of corruption.

In Macau, a slowing economy together with the prospects of a heightened trade war involving the United States and China could reportedly lead to significant challenges for the 3 foreign gambling firms that operate casinos in the former Portuguese enclave. [...]
Comments
Leave a reply