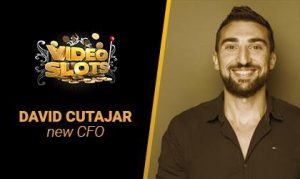 According to the Monday news report, Cutajar has been with Videoslots since 2016, serving as Head of Finance, during which he launched and led the department and doubled the number of employees at the firm. The promotion will reportedly take effect immediately.

A former PWC graduate, before signing on with Videoslots, Cutajar reportedly worked in senior accountancy roles for pan-European sports betting brand WINunited and leading video game developer, King, according to the news agency.

“The appointment of David Cutajar as our new Chief Financial Officer is one that we are all delighted about, with his previous position of Head of Finance making him the perfect choice. ”

“He has years of experience and is already highly esteemed by those around him and we are excited to move forward with David at the financial helm,” added Stevendahl.

“Working at Videoslots has been rewarding and exciting since day one and I am delighted to be taking on this new challenge.”

The supply deal in late November was preceded by further content arrangements with the likes of Spigo ApS, Habanero Systems BV and Evolution Gaming Limited, with the operator declaring at the time that arrangements such as these have helped it to grow its portfolio of games in order to maintain its standing ‘as the most varied and high-quality online casino.’

Only a week after launching its Ninja Casino brand in Estonia and prominent online casino operator, Global Gaming, has now announced that its SafeEnt Limited subsidiary has become one of the first to receive a Swedish iGaming license. Five-year [...]
Comments
Leave a reply