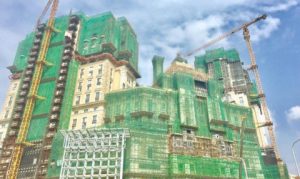 In Macau, the boss for local casino behemoth SJM Holdings Limited has reportedly announced that his firm is hoping that the government will allow it to operate ‘300 to 500’ new-to-market gaming tables at its under-construction Grand Lisboa Palace.

According to a report from GGRAsia, the revelation came yesterday from the Hong Kong-listed operator’s Chief Executive Officer, Ambrose So Shu Fai (pictured), with the 67-year-old additionally stating that he expects the $4.6 billion venue to begin welcoming players and guests by the end of next year.

“Regarding Grand Lisboa Palace, we hope to finish that project by next year so that in the first half we have sufficient conditions to apply for the operation permit from the government.”

SJM is responsible for some 20 casinos spread across Macau including the iconic Casino Grand Lisboa and newer Emperor Palace Casino. It began work on its Grand Lisboa Palace in February of 2014 with the finished Cotai Strip venue due to feature a trio of five-star hotels branded under the Grand Lisboa Palace, Palazzo Versace and Karl Lagerfeld monikers.

The company further hopes that the finished Grand Lisboa Palace, which is to moreover offer a plethora of shopping, dining and entertainment facilities, will be able to compete with nearby rival integrated casino resorts such as the $2.4 billion The Venetian Macao from Sands China Limited as well as Melco Resorts and Entertainment Limited’s $3.2 billion Studio City Macau and had initially planned for its gaming floor to host approximately 1,000 slots alongside some 700 gaming tables.

GGRAsia reported that the third quarter saw SJM Holdings Limited operate an average of 1,408 mass-market gaming tables as well as some 291 VIP counterparts in Macau with So also proclaiming that the firm still plans to allocate a portion of this inventory to its Grand Lisboa Palace.

In Macau, the Court of Second Instance has reportedly ruled that the local subsidiary of Wynn Resorts Limited should be jointly liable for a chip deposit worth approximately $765,970 that was stolen from a junket firm operating inside its Wynn Macau [...]
Comments
Leave a reply